The Lord’s Prayer and the Pastor’s Heartache 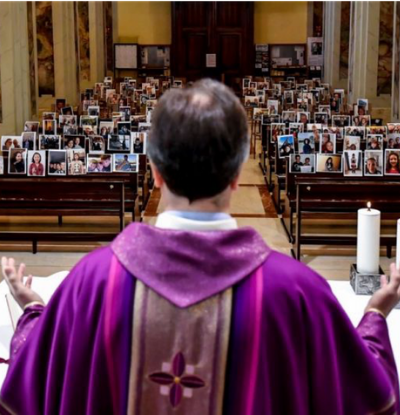 When all this coronavirus stuff got started, there was this haunting photograph of a priest in Rome standing before photos of his quarantined congregation tacked onto the pews so he could hold Mass and pray for them and see their faces where he expects them to be. It was a photograph that pulled at all our heartstrings because those of us who are churchy know that members of a congregation do have those places in the pews where they’ll always be. To look out at an empty church and pray for all the souls who are not there is lonely work, and that photograph brought it home.

But I didn’t try to do what he did.

Other pastors mirrored our colleague in Rome and they put up photos in their sanctuaries. Some congregation members had some fun with it and placed teddy bears and other stuffed animals in various places so their pastor didn’t have to preach to no one in particular while the service was live-streaming and most everyone was at home. We live-streamed from the church for a few weeks and then realized we had to go home and record over zoom because that time had come.

We had so many details to consider, so many little problems to work out, there was no time to put together a collage of photos of everyone. Rather, there were burning questions: Could Zoom allow singers to sing together across the internet in harmony in real-time and be recorded together? The answer is no. It can only be soloists, singing families that are sheltering together, or people recording harmonies over recordings of melodies. What about virtual communion?  Because we’re from the Disciples of Christ tradition, a group that understands communion to be an essential part of worship and that allows for lay leadership at the Table, the answer is yes. Each household has become home to an altar with bread and cup laid out and ready on Sunday mornings. Each family has someone who fills that Deacon role in putting it together—whether they’ve ever served in that capacity in church or not—and coffee tables, kitchen tables, TV trays, and end tables become the home sanctuary supporting dishes holding Jesus’ broken body and shed blood in so many varieties waiting for that right moment. In a Facebook Premiere of a Zoom recording every Sunday, I say the words of Jesus that bring us together “This is my body, broken for you. Do this in remembrance of me. This is my blood poured out for you. All of you drink of it in remembrance of me,” and we eat the bread and we drink the cup together but separate. And it feels like communion should feel. So much of our worship online does.

At our online services, we have a father and daughter team who sing the hymns. We have a director of music who leads the Call to Worship and Doxology. We have soloists who are recording things at home to be played at just the right time. Even our Passing of the Peace moment is carried out in the comments beneath our streaming service. So much poignant beauty, I don’t need all those photos that Roman priest needed. The community is here.

Except for one thing.

Last Sunday, I was struck during worship that, although I was just sure people from our faith community were saying the Lord’s Prayer with me, I couldn’t hear any of those other voices. I heard only my own—on the screen, prerecorded from the day before.  Very much alone.

You know, as a pastor leads The Lord’s Prayer, she keeps a few things in mind. She keeps the pace slow enough that people have enough time to think over the words as they’re recited but quick enough that the community isn’t frustrated by going too slow. She makes inflections at certain places, takes breaths, and makes pauses. She follows the people in the room, too, modulating the pace and the volume to make sure we all stay together. Sometimes she can hear someone going a little more slowly. And sometimes she can hear someone just wanting to speed it all up. And when we get to that crescendo moment, “For Thine is the kingdom and the power and the glory…” we all say it a little louder and faster together landing on that word “FOREVER” together with intention and gratitude. “Amen” after all that becomes a prayer in itself and we have made something powerful happen together in that room. In some ways, a ritual like reciting The Lord’s Prayer together is like that old adage about how you can never step into the same river twice. Though we say this prayer in worship every week, it is different every time we say it because of the community saying it together.

Now, we’re into week six of worship over Zoom from home, week eight of worship with distance, but something about it hit me this past Sunday, that I was saying this prayer alone. Again. Wishing I was surrounded by those familiar voices and the gravitas they bring. And then suddenly there was an ache, a deep welling up of tears from somewhere inside and I began to sob as I recited the Lord’s Prayer alone with myself, but surely also with those people in their home-sanctuaries whom I could not hear. It wasn’t the faces I missed, after all. I miss all the voices!

At that point, I realized how deeply I’ve been longing for this congregation, these people who demonstrate faith to me on a regular basis. We’ve had our Zoom meetings and phone calls, texts and FaceTime. We’ve sent emails and commented on social media to one another. People have taken up sending notes and cards in the mail, too. 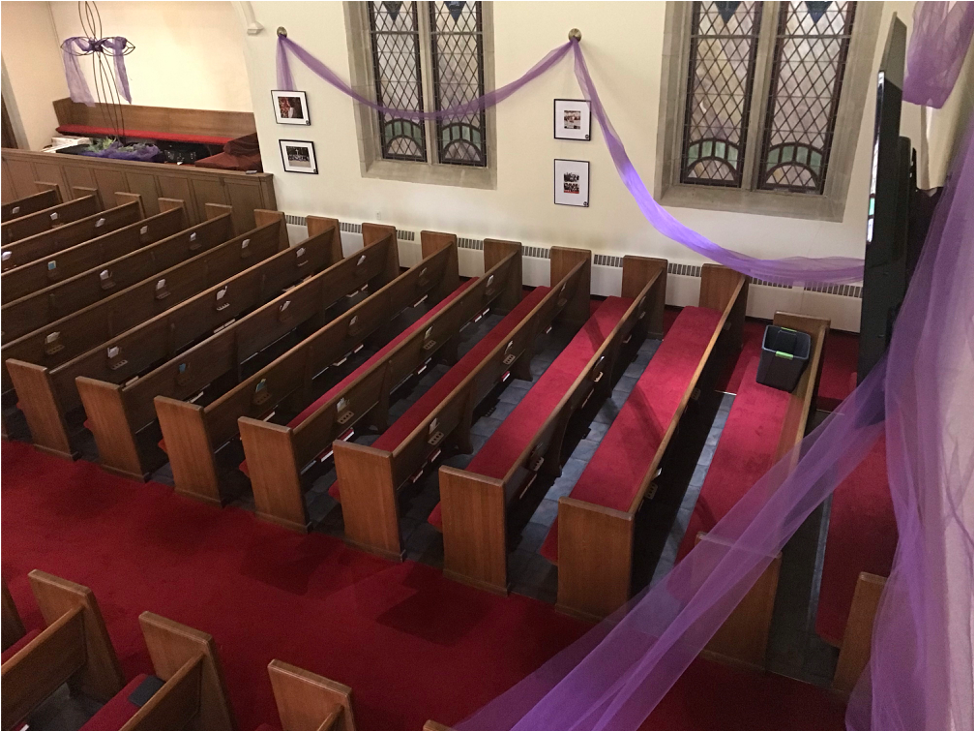 It is a congregation in touch with one another, even across distance. There have been inside jokes and deep discussions in all these different ways. But we haven’t had our voices raised at exactly the same moment in earshot of one another for two months. And, oddly, more than anything right now, that’s what I ache for the most.

So, friends, forgive me in advance, if you hear a funny catch in my voice as we say The Lord’s Prayer some Sunday or see my eyes brimming with tears. It is only this pastor’s deep loneliness for the life-giving community that, with God’s help, has shaped her life these past 20 years.

And, what’s more, forgive me for that day, a future day I can only imagine, when we’re all back in the sanctuary and I hear us saying it together again for the first time.

Even if I need a few tissues to get through it, I promise I’ll savor every word. 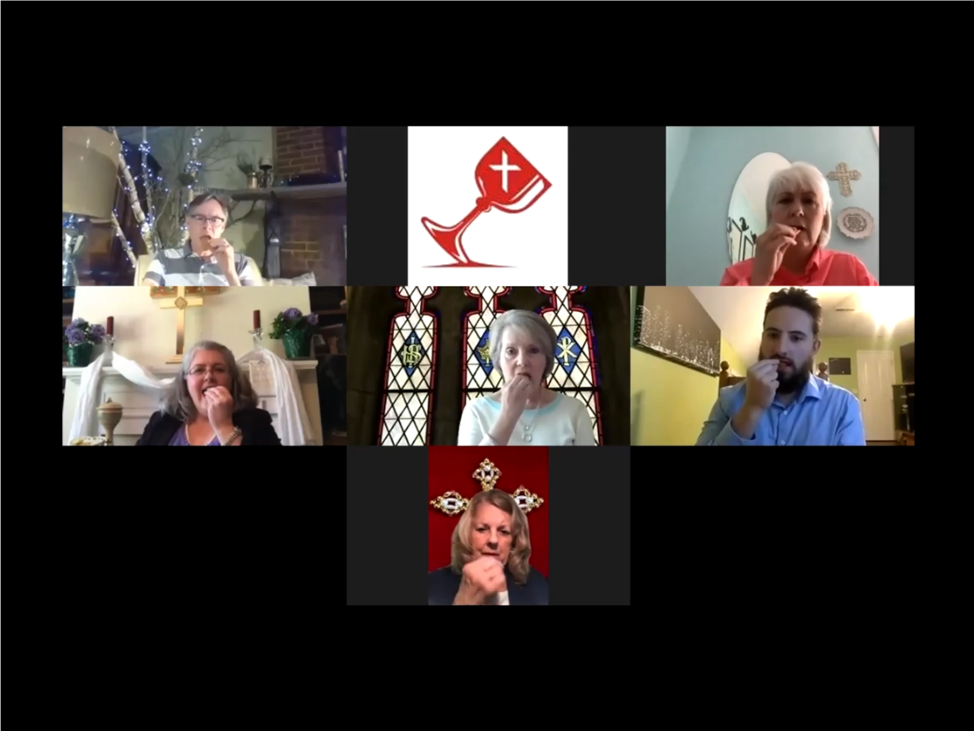 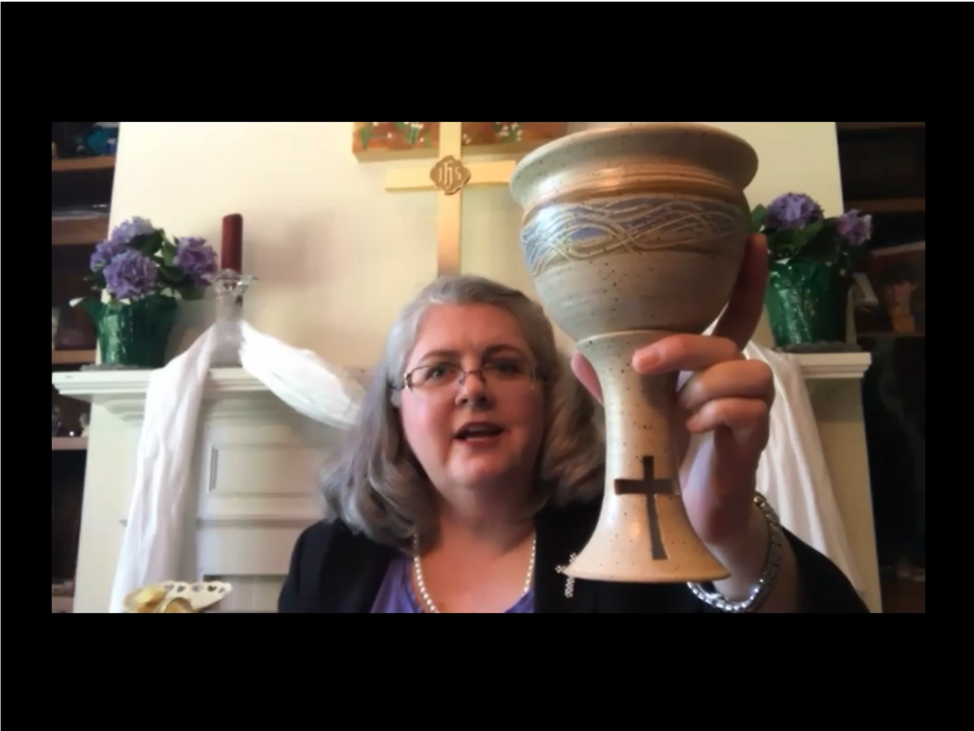